Minimalism has fallen victim to hype, like many other concepts. A term like this has an origin and a niche following, then it becomes trendy. More and more people have their spin on it and want to label themselves as such. It goes from fluid to nebulous to devoid of meaning, at which point its early adopters either abandon it or rebel against it. 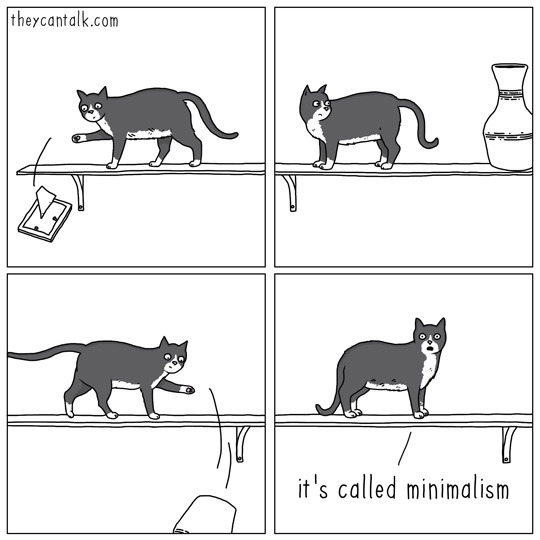 Usually I’d just shrug at the latest design/tech/lifestyle fad, but shrugging at things doesn’t lead to new writings and discussions, so… Why would I choose to pick at minimalism, though – a harmless, even helpful trend? Well, because:

Considering just the material aspect of what goes into minimalism (the design aspect deserves a separate note), the ideas and advice I see boil down to one thing: try being poor. I am quick to define “poor” as someone of modest means who can still live relatively independently. No poverty line and dire need situations.

Let me give you an example. Not buying anything you don’t immediately need is considered a challenge towards achieving minimalism, or is given as a “rule”. Same goes for reusing items as much as possible and so on. That’s actually good advice to follow, but shouldn’t it apply to everyone, not just “minimalists”? Especially if we have any ambition to tackle the economic and environmental issues we all face?

Are all these minimalists wealthy people with spending problems who need a system for self-control? If yes, haven’t they ever been poorer (as students, perhaps) and don’t they remember how they used to live? If no, aren’t they limited by their lower income and therefore have no choice but to be minimalists?

Maybe, after decades, it finally hits me what consumerism is. Maybe I just can’t deal with my inner dissonance of being happy that so many people now can afford to live a life with the products of modernity yet angry that we get addicted and abusive with this privilege. To the point where common sense and moderation need to be established as a counter-culture, as a limitation.

You are not limiting yourself, you’re just going back to the baseline.

Many of the things I’ve read sound like they come from decent, humble people who try their best and have done quite well. In the spirit of (meta)minimalism, I ask them – do you really need minimalism?

Currently there are no comments, so be the first!